← The future is still secret
College Theatre versatility at its height →

Under the Skin and into the psyche

Soooooo…. Under The Skin.

What is sure to be one of the most polarizing films of this year has gained more appreciation from me since seeing it at the State Theatre‘s late show last Friday night. It’s a perfect film for a late show, with macabre themes and plenty of unsettling imagery. 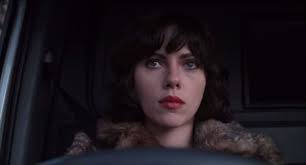 Scarlett Johansson adds to an impressive recent repertoire of roles with this performance, The actress strips away (quite literally at times) her aura of Sex Symbolness and Appeal, taking us back to an earlier era somewhere around ten years ago when she was more known just for her performances and less for her off-screen activities. Long stretches of the film are devoted to her character being off on her own, and while Johansson does not carry the movie in as quite an assured way as elder veterans Sandra Bullock and Robert Redford (among others) did in recent films, she commits to the character and losing herself — or rather her assumed “ScarJo” self — in the storyline.

But what is the storyline, exactly? After an assured and striking Kubrick-style opening sequence, we are quickly dropped in to the outskirts of Glasgow, Scotland. Johansson’s unnamed female character is just there, with an immediate predatory orientation established. She relates to a few people, who could be considered accomplices, but their exact relationship is not clearly explained. Soon the character is on her own behind the wheel of a bulky white van and exploring the outer neighborhoods of the Glasgowegian surroundings.

At one point early in the film the woman finds herself on a beach, in a memorably unsettling sequence where she does the opposite of what a Good Samaritan might do, helping to clarify her character intent and give a hint of what might be lying ahead in the story.

It quickly becomes apparent that she’s looking for some people – namely, seemingly aimless men who “won’t be missed”, to quote other reviewers, if they don’t come home at night. This is most strikingly and unsettlingly seen in a series of late night liaisons that the woman initiates by taking men back to “her place,” but what happens after that is a bit darker than a hot mess. It’s at these moments that the film’s music score, like a modern-day Bernard Hermann scoring Hitchcock, is at its most striking and unsettling, as a theme is established for these incidents that makes it clear that the moments are important to the larger story.

I will add that those sequences – when the woman is predatory towards the man – were unsettling for me as a male viewer, as if a later point that the film makes about gender, which I won’t spoil, is foreshadowed and turned on its head.

Johansson’s character continues to explore and, seemingly, struggle to comprehend life in Glasgow and the immediate surroundings. While these sequences were possibly the most distant or unclear, narratively, of the film, they shine a rich and telling spotlight on metropolitan Scotland, reminding me (having been there in Glasgow and many other regions of the country) of its unusual combination of a brutal and invigorating quality of life, rich street culture and heightened regionalism, which is also seen in the movie in a series of incomprehensible statements, given their thick Scottish accents, from a range of people peripherally coming in and out of the main story, some of whom apparently didn’t know they were being featured in a movie or interacting with a well – known actress.

When an attempted encounter with another loner guy (who is a real individual and hopes to use his role to bring awareness to a health issue/seen and not being seen) doesn’t go as she’s planned, the woman heads north to the Scottish Highlands and the film makes a noticeable change in tone, shifting from urgency to something more … reflective. It suggests through action (dialogue is at is most minimal here) that the woman is somehow more willing and accepting to try human life at this point, as if the rejection from the other man challenged her to look at her own choices, more individually. I found this section of the film to be the most abstract and challenging to grasp, but I think it has stood out with more meaning in the days since.

I don’t know what this film means (who can, really?) but I feel appreciative of its willingness to challenge and provoke the audience in a subtle way, along with a willingness to let actions speak louder than words complimented by an atypical story.

Once upon a time, there was a boy from New England. He grew up with a sense of adventure, loving to travel around the Northeast region. He could always count on the presence of a Buddhist community in his family and friends. Later, those interests merged. His sense of adventure continued to grow, expanding across Europe and then back the other direction across the USA.
View all posts by JP »

← The future is still secret
College Theatre versatility at its height →