I haven’t been doing too great on the “film flashback Friday” initiative, probably due to my grad school schedule. So here is a belated entry for that series. 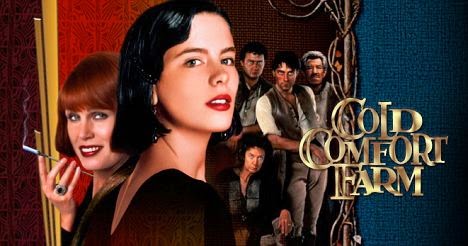 I recently reacquired a DVD copy of (what is probably) my family’s favorite movie, Cold Comfort Farm. I was delighted to watch the film again a few nights ago for the first time in too long.

Originally made for British television by well – regarded director John Schlesinger, the film premiered there in 1994 or 95 and later enjoyed a successful and long running US cinema run in the summer of 1996. My parents and I caught it at the Gloucester Cinema at the tail end of that summer, and it was a staple in our VHS and DVD players for many years afterwards. We continue to enjoy occasionally quoting lines from the film.

The story follows young London socialite Flora Poste (Kate Beckinsale) who looks at the bright side of life, even following the death of her parents. While briefly living with an older socialite friend (Lumley), Flora solicits distant relatives on whether or not they can host her in their homes. She receives a quick response from cousin Judith Starkadder (Atkins) who tells her “there have always been Starkadders at Cold Comfort Farm (and they’d be happy to host) Robert Poste’s child.”

And so Flora travels out to the farm, in Sussex, discovering a wild assortment of characters in residence, including young, servile sons Seth and Rupert, flighty Elfine, patriarch Amos, and great aunt Ada Doom, who rarely comes out of her upstairs room and has not left the property in a number of years. Ada was forever traumatized by an incident in her youth where she saw “something nasty in the woodshed” and doesn’t shy away from reminding her family of that, even though she can not remember the specifics of the event.

After an initial adjustment period, Flora takes it on herself to better the lives of the farm residents. She also navigates her own path of empowerment and an entanglement with shy yet wily London suitor Charles, and an unwanted suitor, noted author Mr. Mybug, played by Fry.

The story unfolds in a whimsical and playful style without being played for cheap humor. Each of the actors knows exactly how to play their scenes, whether dryly or broadly humorous, and contributes to the timeless feel of the comedy. As I watched it now in 2014, I still laughed at the same lines, but felt it was a natural and not anticipating reaction. They’re aided by an excellent attention to period detail and careful evocation of mood and style, with the jaunty musical score (regrettably never released in a recorded form) significantly contributing to the flair of the film.

When I had the pleasure of meeting Eileen Atkins in 2007, she appreciated my interest in the film and told me an interesting trivia detail about her role. (that experience was recapped in an entry on this blog last year.)

Watching this film again in 2014 brings up mixed feelings about Kate Beckinsale’s subsequent career trajectory. My parents and I observed with dismay as she began a sharp move away from British and independent dramas in 2001, a move that appeared to be solidified just two years later with her participation in the Underworld series. And now having recently passed age 40, noted as a difficult decade for film actresses, Beckinsale may be facing tough choices about where to go with her career. She also continues to be noted more for her beauty and cinematic ass kicking, as this blog article bluntly reinforces. I’d like to see her go back to the London stage or to a more character – based drama, but she appears to be well – settled into a Hollywood based lifestyle.

Perhaps in the present day Cold Comfort Farm has a dual role as a comedy classic and a time capsule. I will continue to appreciate it.