Early on in my fall 2004 London studies, I got to know the West End’s equivalent of the TKTS booth in New York City. The British version is located in Leicester Square, the heart of central London, and, at the time, advertised its daily deals using a mix of paper and digital advertising. (I would assume they are all digital by this point in time.)

One day I “went round” as they say in London and saw that there was a 10 pound ticket deal for a show that night. I hadn’t yet equated that the price of the ticket was a fair judgement in quality, and so I purchased the ticket for Murderous Instincts: The Salsa Musical. Over the course of the day I became aware — maybe I saw a feature article or two — that the musical had been in “development hell” and wasn’t expected to be well – received. I think I had a few misgivings about going to the performance, but ultimately decided to attend. After all, it was at the Savoy, a storied location in London, and had to have some redeeming qualities, right? 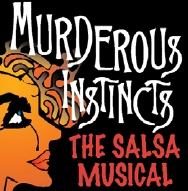 What a train wreck! The musical closed not long after that night, and I was slightly embarrassed to have bothered to attend. Despite the artistic troubles, or perhaps because of them, they had a large advertising budget, and I remember it took some time for their posters to disappear from the several Tube stations I’d seen them in.

For some reason, now 10 years later, I can still clearly recall a handful of moments and brief musical snippets from the show. Was it so bad it was good? An oddly fascinating experience to see such a messy show in the West End? Apparently the star, Nichola McAuliffe, referenced the experience in a later book. One review expressed the broad negative sentiment.

I’m sure these lasting memories of Murderous Instincts are some version of “can you believe that! I can’t either, but I can still tell you about it.” I wish that I hadn’t bothered to see that particular musical, but it was a great learning exercise about the quality of productions and an early clue about the relationship of production, marketing and PR.