The Detroit Film Theatre reopened for the season last night with Wallace Shawn’s adaptation of Henrik Ibsen’s play The Master Builder, here called A Master Builder for its cinematic iteration. I joined a large crowd there tonight (and may have been the youngest member of the audience) for its second screening. 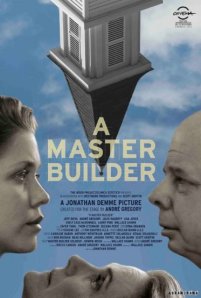 Shawn stars as the titular character, a manipulative architect who has long been used to bossing around his staff and family members, including a possibly mentally distressed wife, played by Julie Hagerty in a role worlds away from her more well – known comedic performances. It is quickly made clear that the Master Builder is on his deathbed, but he appears to have no remorse or last wishes. As the film opens, he’s visited by a colleague (Andre Gregory) who seems to have some unfinished business, but their conversation does not go completely satisfyingly for either party. Much pathos lingers in the air from all the characters and the old house setting, which appears in quick exteriors to be somewhere in New York or New England.

After a particularly intense moment, a mysterious woman (Lisa Joyce) appears, all dressed in white. She and the Master Builder have a lengthy conversation about an incident where they may have met ten years before. This particular section of the script is expertly tonally sculpted as the mood moves from somber to humorous – and back again – sometimes over just a few lines. Joyce, an actress whom I’m not familiar with, brings a luminous intensity to her role. Looking like a pop singer out for tennis in her white shirt and very short shorts, she seems to bring out a youthful side of Shawn and his character as they quickly focus on how they met before and what the Master Builder needs to do at the present moment. But they are still under the weary watchful eyes of his wife, and Hagerty continues to surprise with her intensity and range of emotional feeling as her role in the story becomes clearer.

Other coverage of the film suggests that Shawn made some modest changes to the play in adapting it for the screen. Unfortunately I have not seen it performed live in order to comment, but the general mood and feel reminded me greatly of a similar Ibsen story, John Gabriel Borkman, which I had the good fortune to see in a 2007 London production starring Ian McDiarmid, of Star Wars fame, and Penelope Wilton, of Dowton Abbey and numerous other film/television projects. (hey, look, that production is referenced on its directors website!)

Shawn and company have created a captivating film. Scenes are generally focused on two characters, with a few brief exceptions, but move fluidly from one segment to the next. Director Jonathan Demme has an extensive and acclaimed resume in film. I found his early scenes involving a hand-held camera to be overly kinetic and dramatizing, but appreciated a later focus on natural light in the scenes and a shift to letting actors do the talking and storytelling.A late sequence involving unshown off camera objects was an effective nod to the probable limitations of the stage.

The film unsurprisingly holds the story’s dramatic intensity through the entire length of the film without betraying its stage roots. Shawn seems to have achieved a timeless quality with the text, and where heis known for his immersive adaptations of other works, such as Vanya on 42nd Street, this one will join them in continuing to hold a rightful place in the theatrical – cinematic pantheon.

One thought on “A Master Builder stacks the deck of drama”