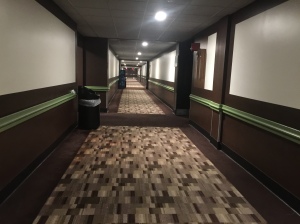 (I started writing this in January, but didn’t get very far into it.)

It may seem strange for a hallway to provoke nostalgia, but that’s exactly what I felt while wandering around Showcase Cinema Woburn on a Friday night in January, a rare weekend night off the island.

From a point in the fall of 1996 (I think this Jean-Claude Van Damme feature was the first of many movies we regularly saw there) until sometime a year later in the fall of 1997 (pretty sure this oh-so-1990s film was the end of the routine visits), this cinema was a regular destination for my dad and me. He did not like the “quality” of our closer-to-home cinemas that were in operation at the time, and thus suggested we drive a little farther afield to the multiplex in Woburn. I grew a bit fixated on the mechanics of going to Woburn (and other cinemas in the area that we occasionally alternated with) and eventually made sure that we were managing to see most if not all of the individual screens in the complex. And with Woburn, we ultimately succeeded in covering all 14 of the individual auditoriums.

Our frequenting of the cinema coincided with a modernization project for the complex, where the interior gave way to a 1990s update, with a lot of blue color, refinements to the screens, and improved carpeting, among other features, but notably NOT the stadium seating that was coming into fashion at the same time in other just-opened complexes around the Boston area.

So the Showcase developed a certain nostalgic place in my memory, being as that I would still see it when on Route 128 and listed in the movie ads, etc, over the years, even though I don’t think I had seen a movie there since 1998 … UNTIL NOW (said in movie trailer voice).

I arrived early for the movie on that Friday night in January. It was the late show, 9:45 pm or something like that, and since late shows don’t exist on Martha’s Vineyard, it’s become exciting for me to attend them when I can. The movie was showing on screen 3, where my dad and I had seen Star Trek: First Contact, The Saint and maybe one other feature in that ’96-’97 period. (We kept a written record of what we saw at each cinema – including which screen, and I remember some of them to this day.) As I walked around the cinema with few other people in sight, the memories of those films and the specificity of the experience came right back.

I doubt that modern audiences would care about the details of the screens as much these days – especially now in mid 2020 as the cinemas fight for their survival – but for this 90’s kid it was an exciting way to learn about different experiences of presentation and make a moviegoing experience somewhat uniquely memorable. I don’t know when I’ll next get back to the Woburn complex, or feel a need to, though clearly those memories will stand strong.