The other night I once again found myself pulling out the stalwart and timeless DVDs of The Avengers. This time my attention was drawn to an episode near the end of Emma Peel’s second and final season, entitled The 50,000 Breakfast. I wanted to watch it initially based on a remembrance of the episode’s unusual music score, which does not recur as much as some others do in other episodes of the series and thus, stands out more on its own. I did not expect on revisiting the episode at this particular moment in time to see a clear allegory for the present uneasy political moment in the USA.

In the story, our heroes Steed and Mrs. Peel encounter a team working for the mysterious and accomplished Litoff Organization, focused on finance in Central London. Of particular note in the present era comparison are the two lead individuals they interact with from the company. One person is Miss Pegram who is not given a specific job title but is clearly the woman in charge, an idea which is quite revolutionary for 1967. In the other camp is company butler Glover, whose exact raison d’etre for being part of the company is not made clear by the script (well, I guess he’s Mr. Litoff’s butler, but Mr. Litoff is never seen) and so Glover stands as a bastion of an older time, where men and women had more traditional and formal gender roles. Near the end, when Glover is revealed to have malicious negative intentions that place him aligned with the rest of the villains, he presents a brief and strikingly abrupt (for the rest of the series) monologue, claiming that he “want(s) to be ill mannered and rude and uncouth, and order people about, especially women. I look forward to being excessively rude to a considerable number of handsome women!” – and so he is obviously, with the present day parallel, an elder Donald Trump, while Ms. Pegram, with ambitions to conquer the “man’s world” of finance and accomplishment, clearly evokes Hillary Clinton.

And that is another of many ways that The Avengers remains both timeless and ahead of its time. 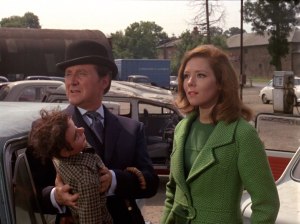 Steed and Emma investigate in this episode (image from http://www.dissolute.com.au/the-avengers-tv-series/series-5/519-the-l50000-breakfast.html) 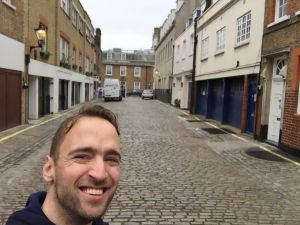 Paying homage to The Avengers (at one of the series’ primary filming locations) while back in London.

My recent visit back to England gave me some nostalgia over my original introductions to British culture, which came in the visual entertainment format of The Avengers television show and the James Bond film series. So I decided to re-visit some of their output during some downtime back here in the USA.

First up was the Avengers fourth season episode entitled A Surfeit of H20. This story comes right in the middle of the series’ best season, and it made me quite unsettled when I watched it in my younger years. It seems to take a more unique spin on the standard Avengers formula than the episodes surrounding it, with two particularly eccentric guest allies complimented by two particularly devious guest villains. As always, the story is anchored the inimitable Patrick Macnee as the suave John Steed and Diana Rigg as his stylish partner Emma Peel. As an aside, the episode’s plot gets summed up rather well via Tumblr.

In the modern era it is intriguing for me to look back (or rather look again) at many of the episodes which were frequent childhood/younger years viewing material for me. This had its ebbs and flows, coming first with the series showing regularly on the A&E network around 1990, and then a few years later on the Encore Networks “Mystery” channel from around 1995 to 97. The point is that I got to know the material very well.

But, of course, with the now-older personal perspective, the material seems … different. wittier. more classic as time goes on. Those feelings felt particularly evident in the case of this episode, which, as I mentioned, spooked me when I was younger with its atmospheric black and white sequences, but now more amused me. At the same time it stands as a hallmark of the series’ black and white filmed era, with a tight attention to detail, location filming, and carefully chosen guest stars. 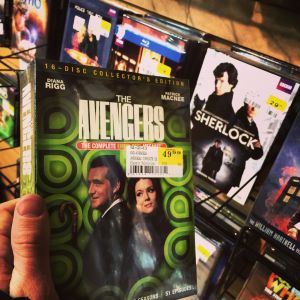 Next up was a look at one of the color episodes of the Emma Peel era, Something Nasty in the Nursery. This is another one that I remember particularly enjoying when I was younger, but somewhat neglecting in the years since.

The story takes a more pedestrian slant than most of the earlier tales in the series, but it’s indicative of the general campier and goofier direction of the series at this point in the production history. Steed and Mrs. Peel are tasked with discovering why top secret “hush hush” secrets are (again) leaking from higher-up government operatives. Turns our that the men in question had (conveniently) all been disciples of one Nanny Roberts, who later oversaw development of “GONN”, the Guild of Noble Nannies, a seemingly well-mannered finishing school for ladies in training. But it turns out that the current leaders of GONN, a Mr. Goat and Miss Lester, have other plans.

This episode lacks the memorable style and depth of some other installments, and has a number of continuity errors (or simply bad edits) that detract from its appeal. A side plot involving an ultra upper class toy shop is more intriguing than the primary plot. But the story continues to show the series’ careful, deliberate and tasteful attention to style – especially in the color era – with vibrant hues bouncing off the screen and distinctive characterizations that live up to what writer Rodney Marshall calls the “subversive champagne” of the series, where dramatic layers are presented subtly with a slightly humorous edge.

Finally, my re-viewing extended to a pair of James Bond films made thirty years apart – Casino Royale and The Spy Who Loved Me. But I will save those thoughts for another post.

I really ought to write a detailed post about my longtime relationship with The Avengers (no, not that movie) – the 1960’s era British television show. I’ve been fortunate to see several of the leading stars of the series (Diana Rigg, Honor Blackman, Joanna Lumley) live onstage.

In the present day, the show continues to have timeless appeal for me as a sort of visual comfort food, meaning that I keep the DVDs close at hand, but don’t always turn them on. But when I do, I can sit back, and enjoy, and even look at the individual episodes with refreshed eyes, since I have been watching some of them semi – regularly for 24 years. The show remains popular thanks to its blend of wit, style and unique storytelling.

And so tonight I was oddly drawn to the series’ most polarizing episode, with its most ridiculous title: Look – (stop me if you’ve heard this one) but there were these two fellers. 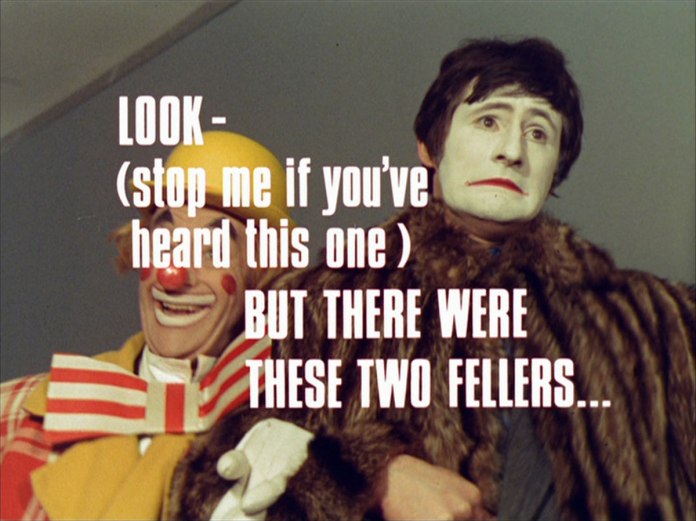 This story is one of the early episodes of the series’ final season, filmed in 1968, and finds John Steed and Tara King on the trail of a series of bizarre murders of businessmen across London. Various clues point towards culprits in the comedy industry, and the two agents are hot on their trail to see where it all connects. Along the way, they meet a handful of British comedy stars known and unknown at the time, including a pre-Monty Python John Cleese, and Bernard Cribbins.

The villains’ actions are accompanied by a distinctive piece of music that I recall often imitating when i first saw the episode as an impressionable six year old during the series’ rebroadcast on A&E in 1990. In a dramatic sense, the musical accompaniment of the episode doesn’t seem to register until close to the end, when composer Laurie Johnson chooses to insert music originally seen in an earlier season episode into this particular story. (Prior to that, there’s much repetition of a somber, grey theme broken up by the jaunty villain music.)

I could write for quite a while on the art of periodically revisiting these TV episodes. I think it’s interesting that the “lesser known” (to the popular opinion) stories are more appealing to me as time goes on – as in preferring the Linda Thorson season to the Diana Rigg episodes. And, with a more refined artistic sensibility, i notice various acting and story choices that I would not have caught at all in my younger years.

For instance, this episode is bogged down with a lengthy sequence about two-thirds of the way through the story. Tara King is assigned to protect a businessman in danger, and long story short, she doesn’t succeed. Their banter is awkwardly protracted and the story seems to forget about the more interesting villain characters. The Tara King character is also at her most naive here, while later episodes in this long season, which was filmed over a 15 month period between late 1967 and early 1969, show Tara as more confident and experienced.

For The Avengers at its most endearingly self – referential, see here: