For the second year in a row, I had an experience of watching someone I knew “way back when” act in her feature film debut that is attracting significant industry attention and critical praise. This year it is Desiree Akhavan, last year it was Lupita Nyong’o. Both connections stemmed from my undergraduate years at Hampshire College. 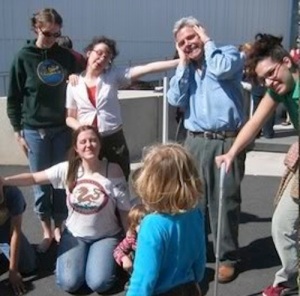 Akhavan and I were two of ten students enrolled in a highly memorable (IMO) semester long study of improvisation (pictured at right) at Smith, which maintains its official status as a women’s college but welcomes students from the other four colleges in the region (Amherst, Hampshire, Mount Holyoke and the University of Massachusetts at Amherst) to take courses that might augment their studies at their home school.

In this particular class, taught by now professor-emeritus John Hellweg, the setting and the content were equally rewarding and challenging. We met once a week in the college’s boathouse, which doubles as a classroom, and went well beyond the familiar scope of improvising (comedy) into exercises that had considerably more meaning and depth. Elements of mysticism, storytelling, masks and inventive chose your own adventure were all part of the journey. We also expanded the role of the classroom, frequently leaving the boathouse for site-specific exercises such as seen in the photo above, near the college’s campus center. The class inspired me to incorporate elements of improvisation into my directing and character – building work, and I haven’t forgotten about that process today, even though my theatre work tends to be more in the front office than the rehearsal room.

It doesn’t feel easy to put into words what the experience is like to watch someone you knew earlier in their life on a big screen, though I am sure others have had similar feelings. Somewhere between awe, surprise, amusement, pride, acclaim, a little envy, some memory, and ultimately an appreciation. Those feelings all came to my mind as I enjoyed Appropriate Behavior, Akhavan’s feature film debut in a writer/director/lead actor trifecta. The film continues to play at Cinema Detroit this week and I’m pleased that my neighborhood cinema is one of a handful of theatres nationally showing the film.

Akhavan stars as Shirin, a 20-something Brooklyn resident struggling with personal identity issues after breaking up with Maxine (Rebecca Henderson), an at times forceful partner whom she “met cute” at a New Year’s party at some point in the recent past. Shirin aspires for a career in the film business, but after taking on a promising lead from a friend of a friend, she finds herself serving as a teacher to an afterschool program of very young (five year old) aspiring filmmakers. The events, along with her ongoing debate on if and whether to come out to her immediate family, add to a continuing sense of questioning for Shirin. But, with an assertive and bold temperament, she doesn’t sit around and mope, and part of the fun of the narrative becomes going along with Shirin to see what she does next, and how Akhavan’s own fresh writing deftly navigates gender, cultural and social stereotypes and expectations while putting a new spin on them against a contemporary New York City backdrop.

The film’s low-budget backdrop is apparent in some technical aspects of the story, such as lighting and sound, but doesn’t detract from the narrative. I might have appreciated some more clarity in the time shifting aspects of the narrative, but am not sure how that would’ve been best conveyed. As it stood in the finished film, it was sometimes difficult to tell where the action was in the linear timeline, and so it became like a mental jigsaw puzzle to put the different scenes together. Not a problem for me, just could have been smoother. Akhavan showed a committed hand in the direction of the film, eliciting assured and sharp performances from the whole ensemble along with herself. She demonstrates no hesitation in showing herself/the character in a potentially unflattering light, and ultimately, that added to Shirin’s endearing appeal and relatability, and is surely connected to why multiple press outlets have picked up on the film and her current contributions to pop culture.

And so how could I be anything other than impressed to see someone I knew way back when receive acclaim, interest and curiosity for her long-form debut? Here’s hoping that Akhavan has more stories up her sleeves and continues writing and producing in her assured, distinctive voice.