In an attempt to blog more, I’m looking back at a blog post that I started just over a year ago. A bit embarrassing to realize that I never posted it, but why not do so now, with some more context added?

A year ago, the Merchant-Ivory classic film Howard’s End appeared at The Maple Theatre in Bloomfield, Michigan, for a one week re-release celebrating an impending 25th anniversary and digital restoration. Somehow I learned of the screenings, probably thanks to my regular scouting of film listings and moviegoing itself serving as a stress relief at that particular time.

I recall being retrospectively impressed by the film’s use of scale, most notably seen in the lush cinematography and music score. Most of the central cast – Emma Thompson, Anthony Hopkins, Vanessa Redgrave, Helena Bonham Carter and others – felt like they are not as active in the present day, or more selective about their projects (probably a mixture of both) and so looking back at their previous work felt especially revelatory.

The theatre itself – one of my favorites in the metro Detroit area – contributed to my enjoyment as well, where it only has three screens with carefully crafted film choices and isn’t oriented towards mass market entertainment. 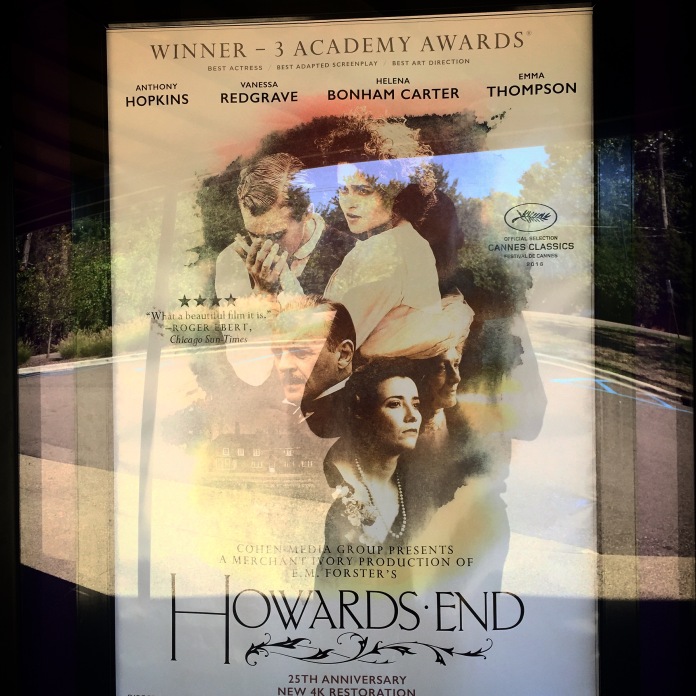 It feels a bit funny to say that The Remains of The Day was one of my favorite films as a kid … but it was. Somehow I never got to see its immediate Merchant Ivory cinematic universe predecessor Howard’s End all the way through as a whole film … until today at The Maple Theater, which is screening it as part of a special limited run re-release.

I’d forgotten how intricate the Merchant Ivory world was, with elements bursting out of the frame and suggesting a wider visual and active world beyond the story. Such depth was particularly apparent in this narrative, with three parallel stories intertwining, intersecting and then branching out into their own narratives.