So far I’ve caught four films at the movies in the New Year, but it may be until February (at least) before I see a film that was actually released in 2014.

This year I have decided to keep a spreadsheet of the films i see at the movies in an effort to better keep track of them and retain a memory of what I saw when.

So, the filmgoing year began with PHILOMENA, which I felt was an appropriate way to return to the movies after experiencing some personal loss at the end of the old year/start of the new year. A story that appeared to be standardly sentimental at first took on a more intriguing feel of mystery as it went on. The mystery didn’t come so much from a “whodunit” feel, and was more along the lines of “what’s going to happen next?”which is often more compelling, dramatically. 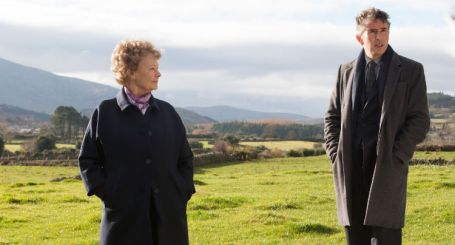 Judi Dench was unsurprisingly excellent in the title role, bringing many layers to a complicated storyline, and subtly playing with the initial impressions of a “twee old lady” to create something more complex. However, I did think at times during the film that it’s unfortunate she doesn’t seem to often have the opportunity to create EVEN MORE complex characters on film (versus what she does on stage) – the most recent cinematic example possibly being her work in Notes On A Scandal back in 2006.

Steve Coogan shone brightly in a dual role of co-writer and co-star here, showing none of his comedic talents that he is known for and keeping things quite straight, even more serious at times, throughout the story. From his many credits related to the film (writer, producer, co-star, optioned the story, etc) one can tell that the material struck a chord with him.

I was interested to learn that this movie marked the first time that Dench has portrayed a real, living person onscreen. The experience seems to have resonated with her, and it’s been sweet to observe the real Philomena Lee participate in some of the movie’s press events and publicity activities, which will probably continue in a modified form leading up to the Oscars, for which Dench recently netted a deserved Best Actress nomination.

Next up for me was SAVING MR. BANKS, a film that I wanted to enjoy, and would have liked a lot more if it had been made differently. 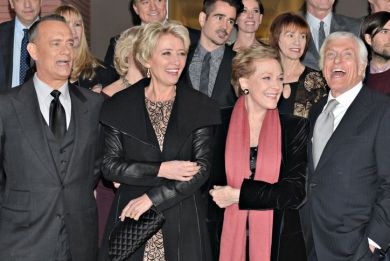 The film’s stars meet the veteran stars at the premiere. I hadn’t seen this image until today and love it!

The film tells the not previously explored on film story of the making of MARY POPPINS, focusing on the challenges that existed between author PL Travers’ interpretation of the work versus Walt Disney’s vision of what the film adaptation should be. Travers and the studio went back and forth on visions and agreements for over 20 years (!) before the film was finally released in 1964.

For some inexplicable reason, the writer decided that this already compelling and familiar story needed to be augmented by a narrative from Travers’ childhood detailing her recollections of growing up with a difficult father in Australia. I might not have had a problem with this if it was told in a traditional part 1/part 2 narrative, but the film constantly intercuts between the two stories throughout the entire film, causing me to lose interest in the total story because it keeps getting muddled between the two time periods. Additionally, some threads of the later (1960’s) narrative are not given time to develop in a way that could leave things clearer for the audience and make it into a more meaningful film experience. (Perhaps this is why the film was almost completely shut out of the recent Oscar nominations in spite of it being a clear and obvious tailor-made contender for awards.)

Having said that, it was delightful to see Emma Thompson back in a leading role for the first time in several years. Thompson has spoken often in press interviews for the film of her pleasure in getting to play a complex part – and it was clear to see she has been enjoying the various publicity endeavors for the film, from singing along at various events tying into the film’s music to her recent throwaway appearance at the Golden Globes last weekend.

Next up was INSIDE LLEWYN DAVIS, the latest film from the Coen Brothers, which I felt like I’d been hearing about for well over a year – though maybe it’s only been a year – and was pleased to finally see in its finished form. After seeing it I also reflected on how the Coens are masters in creating truly cinematic experiences where their story takes you away to a distinct time and space, and it takes… some time to come back to reality after the film. Or the experience lingers in your mind. Or both.

GIF courtesy of Vogue article on the film.

This story exuded an authentic and weary sensibility looking at the competitive and colorful Greenwich Village folk scene of the early 1960’s. I could obviously identify with the narrative thread of “artist traveling with a cat” – and the presence of the cat in the story turned out to be an intriguing barometer of Llewyn, the main character’s, moral compass. The story was bleak at times but never in an unforgiving way, and boasted a keen sense of detail throughout the story. Not to forget about the catchy songs paying tribute to the era, some featuring the talents of Justin Timberlake in a role far away from his well-known pop persona, but clearly highlighting his musical ability.

This film and the next one had me noticing the nuances of screen pairings and couplings, where Oscar Isaac and Carey Mulligan again appeared onscreen following an earlier – and drastically different – pairing in the 2011 film DRIVE. Similarly, in the film discussed below, Joaquin Phoenix and Amy Adams again appear opposite each other just a year after sharing scenes in the also drastically different THE MASTER. It got me thinking about what that must be like for the actors themselves – familial? cordial? old home week? distant? – and if other audience members pick up on the reuniting. (Based on press reports and interviews it seems that both instances were friendly and enjoyable for each pair of actors.)

So, that brings me to HER, seen yesterday back at the reliable Quality 16 – though it’s a film more appropriate for the downtown venues of the Michigan or State Theatres. I’m still feeling awestruck from this film and likely will continue to feel that way for several days. I also feel like it vaulted to the top of my top films in 2013 list, and can see I’m not alone in that sensation. Why did it resonate? It tells a futuristic yet realistic tale with nothing but humanity – no sensationalism, no whirlwind special effects, a strong look at the lead character’s life and story arc, and intense commitment from the principal actors. 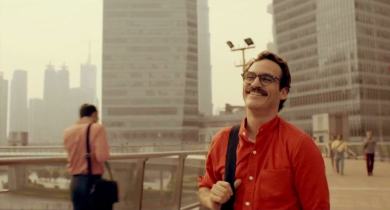 HER looks at the life of Theodore Twombly (great character name), thoughtfully played by Joaquin Phoenix and even more so when you realize that many scenes were him acting alone, similar to other 2013 releases GRAVITY and ALL IS LOST but told in the most down to earth style of the three. Theodore struggles with his life after his longtime love (Rooney Mara, continuing to show impressive character depth and command of the screen) leaves him. I should add that Theodore and his ex’s storyline is conveyed almost completely in flashback, yet in a completely opposite and more resonant way from SAVING MR. BANKS. And when the two characters meet in person again, it drives the point of the whole story home in a powerfully abrupt moment. Theodore has a few other women in his life, with Olivia Wilde appearing in a  well-used blind date cameo role, and Amy Adams supporting him as a neighbor and close friend. Adams continues to show versatility and command in her roles, bearing in mind that this was released in tandem with her (ahem) showier part in AMERICAN HUSTLE. She also gets to deliver one of the movie’s best lines – in a stellar screenplay – which I’ll quote here:

“We are only here briefly. And while we’re here, I want to allow myself joy.”

That line also seems to capture the story arc between Theodore and his personal OS, Samantha, voiced by Scarlett Johansson. I don’t want to go into detail about their storyline here, since I feel that you have to see the film to experience it. But I will say that it is very humane and resonant, with an eerily realistic feel to it when you consider how much time people in the present era (myself included) spend looking at their mobile devices, laptops, large screen televisions…

A few “industry observer” type notes on this film:

To conclude I feel that HER shows an honesty and simplicity rarely seen in modern filmmaking, and reminiscent of an old favorite ETERNAL SUNSHINE OF THE SPOTLESS MIND – which I can’t believe is 10 years old this year. It will be hard to top a film experience like that, but that’s part of the fun of filmgoing – always keeping an eye for that Next Big Thing, and noting the sensations along the way.