I’ve been interested in the film Manchester by the Sea, titled after and set within my hometown in Massachusetts, since it was first announced around two years ago. Originally planned to star Matt Damon, the film had an immediate air of prestige coming from acclaimed playwright and somewhat embattled filmmaker Kenneth Lonergan, known for works including This is Our Youth and You Can Count on Me. As it turned out, Damon was not able to star in the film, but remained as a producer, and recruited his longtime friend Casey Affleck to take over the lead role. I would have liked to have been back on the North Shore to observe when they shot the film during the winter of 2015, which was exceptionally snowy and cold.

With this anticipation in place I was very excited when the film appeared on this year’s Windsor Film Festival schedule across the border in Canada, and thus made plans to attend a screening yesterday, creating an amusing irony of having to go out of the country in order to go home. This was perhaps doubly ironic as I was in Manchester itself just four weeks ago and enjoyed a more leisurely visit than my past couple of times being back, which had been just quick drive-throughs. 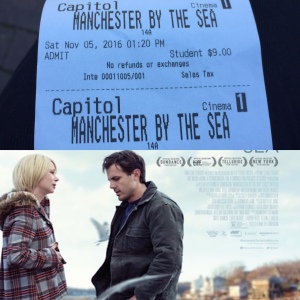 In general the film lives up to its pre-release and festival generated acclaim as a somber drama that isn’t afraid to go into more depth than other stories it might be similar to. The detailed tone is apparent from the opening scenes, when character beats are held just a second or two too long and/or a character says something they might be thinking but not say in a “conventional” setting. Affleck is on screen in nearly every scene and anchors the film with exceptional pathos; his character motivations are initially shrouded but gradually become clearer as the story goes back and forth in different time frames.

As a native of the area, it’s inevitably both amusing and irritating to see how Manchester itself is represented in the story, with a to be expected range of minor to moderate geographic implausibilities sprinkled in the narrative, along with a few glaring omissions or character choices that made it obvious the writer did not have roots in the area. However, the pleasure of seeing familiar locations and landmarks on screen (especially while watching it in Canada) goes without saying! Since it’s fun for me to examine, I’ll outline some of the film vs. reality impressions here.

OK, continuing with the film itself. As Affleck’s character Lee experiences the story, he is tasked with looking after his nephew Patrick, played by Lucas Hedges. This character offers a very well-drawn depiction of mid-teenage years (he’s meant to be 16) and the delicate dance of making choices that relate to your family vs. your own personal journey and desires. Patrick’s arc also contains unexpected humor that enlivens the story, while the character also brings it back down to earth/the reality of the situation at a few surprise moments that add to the dynamic of the uncle/nephew relationship. The process of honesty and being “real” that is established early in the film is most sharply seen in the scenes with Patrick, and actor Hedges rises to the challenge with a strongly committed and revelatory performance. The film toys with sending Lee and Patrick’s relationship into “buddy/odd couple” comedy mode, and there are indeed several humorous moments, but then it comes back to reality with the empathy for both characters strongly intact. On the whole, the dynamic between both male characters made me notice that the film isn’t shy of going in-depth with masculine feeling and emotion, often glossed over in storytelling and popular culture, and that choice likely contributes to the richness of the drama.

Of the supporting cast, Michelle Williams is the obvious stand-out in a few strong scenes as Lee’s ex-wife. While her “Boston” accent is likely the most distracting of the cast (at least Affleck’s is authentic), she also carries the reality of the story and the challenge of character choices in context of the narrative.

I would see the film again, and you should too when it comes to general release and likely Academy Awards season acclaim at the end of this year.