After some misgivings caused by the previous three films then appearing at cinemas much closer to me after I’d driven a modest distance to see them, I decided to resume my filmgoing geohopping this weekend in Royal Oak and Clinton. After all, it’s a nearly 20 year habit for me to go to the film (and not wait for it to come to me) – so it’s unlikely that it will slow down anytime soon.

First up was the Main Art Theatre in Royal Oak, which is always a pleasure to visit at night thanks to its dramatic and classically lit up marquee. I also appreciate how they publicly advertise their upcoming films and events, not just for the next week, but for the next month or two.

New film Complete Unknown is another tour de force for actress Rachel Weisz, who has recently become one of my favorite actresses to watch. (Not that I did not like her before; she’s just become even more watchable with a mastery of technique, inflection and presence.) In this story she takes on the role of Alice (not her real name) – a woman who has shape-shifted her way through at least nine different guises over a span of 15-20 years, because … what? The story doesn’t really tell us why Alice chooses to live such a transient and challenging life, and at times it was hard to suspend the disbelief and buy into the narrative. Weisz sells it strongly by mostly underplaying the whole thing; she’s not there to be an avenger or superwoman, she just wants to blend in.

An awkward framing device introduces us to Michael Shannon’s character, Tom, who is soon revealed to be an old connection of Alice’s. It’s a minor spoiler to say that she has arranged the whole encounter so that she can see him again after a 15 year gap. Incidentally the underplaying was at its best in their first one on one encounter, when Tom frustratedly wonders how and why Alice has even sought him out again. Instead of matching his intensity, Weisz goes the other way with the characterization into a cool and composed slight aloofness that keeps the narrative going and allows more questions to rise. However, the plot point that they hadn’t seen each other “in 15 years” really ought to have been raised up to 25 years, since both actors are obviously in their mid 40s and it strained credibility to think they’d last encountered each other when they were around 30, especially as the dialogue touched on high school and hometowns.

A fun transition sequence in a New York City nightclub, set to the strands of the Chemical Brothers, allows the two leads to leave the club on their own and the story to boil down to just the two of them. This is where the story ought to have started all along. The film takes on an air of momentary unpredictability as they head off on their own … only to encounter veteran actress Kathy Bates, who cameos in a sequence that feels more like an outtake, but keeps up the fun of the story. It is soon revealed that she is married to none other than Danny Glover, and the experienced elders have some fun with their small roles before Tom and Alice go off on their own again.

At this point the film becomes very reminiscent of Certified Copy from several years ago, as the viewer is left to question how far the characters might go with their renewed connection, and the action is intercut with a few brief dream-like sequences that question whether they are being imagined or not. While the eventual ending may be seen as unsatisfying, it does continue with the ambiguity and not tying things up neatly.

It’s good to see Shannon, known for his intensity, loosening up a bit here in more of an “everyman” role. And Weisz carries the film along with a mix of gestures and emotions and feelings, always aware of what she is doing and also the cost of her actions.

This commentary got longer than I expected (I must have enjoyed engaging in the material … so I’ll save this weekend’s second film for a separate post.)

My non-consecutive moviegoing double feature this weekend involved opposite ends of the current indie film spectrum. Both visits were at two different MJR (‘Movies Just Right”) locations relatively near my house; MJR has become my favorite cinema chain to support in metro Detroit thanks to its catchy jingle “it’s more fun at MJR” along with a tangibly LOCAL focus of its business, as the company is headquartered right here in Michigan and thus seems more committed to its constituents than AMC or some other chain. 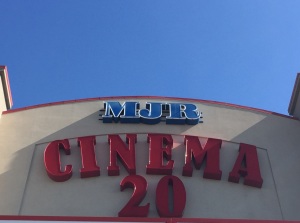 irst up was a visit to the 20-plex in Sterling Heights, which follows a template established in other MJR complexes but seems to do it especially well at this location, even though the surrounding area leaves a lot to be desired. In short, this complex has become my “destination movie” location of choice, even though it’s around 20 miles away from my house. The film I chose, Hell or High Water, has drawn considerable critical praise as a breath of fresh air in an otherwise stale summer movie season, and it was easy to see why; the film mostly lived up to the hype for me.

From the very first scene (a long wraparound shot of a Texas town that has clearly seen better days) it is clear that the story will be told in a distinct way. We follow two brothers, played by Chris Pine and Ben Foster, as they approach and perform several bank robberies in similarly desperate looking towns. But as the nuances continue to unfold for the film itself, it’s clear that the story will not be a simple or action packed revenge tale. Audience allegiance seems to shift constantly between the two brothers, although Pine is ultimately presented as the more sympathetic character. Add in a veteran sheriff portrayed by Jeff Bridges at his most grizzled and muffled (with an overdone Texas accent) and the recipe is in place for a slow-burning character study.

The film benefits from a constantly shifting moral compass that doesn’t settle in one place. Although the ultimate outcome for one character appears without much surprise, the way in which it’s reached continues the impression of being willing to go the extra mile (literally) and not choose the easy route for any outcome. This trend continues as the film reaches its ultimate (and surprisingly non hyper violent) conclusion, as the emphasis is placed on the humanity as much as it can be.

The following evening brought a trip to MJR’s complex in Chesterfield, which I’d previously experienced at an awkward transition moment early this year when they were in the process of converting to increasingly customary reclining and reserved seating. This time, the dust had settled and the cinema was moderately busy. (I was amused that the evening ticket price is 50 cents less than the complexes closer to Detroit, reflecting its location in the farther ‘burbs.)

Not really sure why I chose to catch The Light Between the Oceans aside from an appreciation for location based period drama and the work of the central acting trio: Michael Fassbender, Alicia Vikander and Rachel Weisz. Weisz in particular seems to just get better and better with each film I see her perform in. Amusingly, this film also put Weisz and Vikander face to face; the last two Bourne female leads facing off in a different universe.

Although I walked in with a retrospective appreciation for director Derek Cianfrance’s earlier work – seen in films Blue Valentine and The Place Beyond The Pines – after the film started I was quickly reminded of the overwrought subtext and directorial choices present in those films … and they reappeared here on an even larger scale. It was difficult to get invested in the character and emotion of the story – though undoubtedly lushly filmed and acted with high commitment – when everything is heavily telegraphed in the narrative. An epilogue scene was particularly awkward, both in its hastiness and tidying up of the plot.

My response may also be due to this film falling victim to the “most of the story is telegraphed in the trailer” increasingly common problem among films these days, so that the story’s unfolding was less of a WHAT is going to happen and more of a WHEN is this going to happen. I ought to have just come in for the second hour of the film as it was, but at least the story was told well and with obvious gusto.