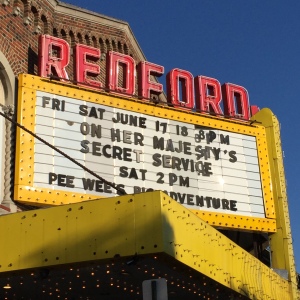 I haven’t been to my once-regular hangout, The Redford Theatre, at all this year, and it seems unlikely that I’ll go over there before the school year concludes in a few short weeks. The likely reason for this is the lingering satisfaction – even nearly a year later – of getting to see my favorite James Bond movie On Her Majesty’s Secret Service at the Redford on the big screen last June.

After seeing the film onscreen once before – and coming close to seeing it onscreen nearly 20 years ago in 1998 at the Brattle Theatre back in Cambridge – I was still excited to see it again. Reasons were similar to why I am often drawn to reissues or revival screenings: the immediacy of the cinematic experience can’t be replicated in your home or in a lighter setting. That’s especially true with this Bond movie, which offered a level of intensity and character that was arguably unmatched until Casino Royale appeared on screens 37 years later.

The previous screening, at the Museum of Modern Art in New York City, offered the excitement of 007’s 50th anniversary year and took place in October, 2012. I’d made a special trip to the city for the event, and was not disappointed – mostly – except for the fact that a key sequence of the film was completely missing from the print that they showed. Thankfully that did not happen at the Redford and the emphasis was on the quality of the experience, complete with old-style intermission as is customary with their classic film showings.

Of course another part of the appeal of this experience stemmed from having visited the primary filming location itself, as referenced in my YouTube clip below, high in the Swiss Alps. I’m currently looking in to making a return visit there, just over 10 years after when I previously went, and am hoping it will work out.

So with the peaks of an experience like that with OHMSS, why would (or how could) I top that? It’s nothing against the Redford, though, and they continue to be a strong resource and community member of Detroit.