We all must wonder what happens when we (you, I, me, us) leave a scene. Life goes on in all ways but we don’t see it. Or we hear about it later but don’t witness the actual action.

I have been thinking about the other side of my/our actions recently. It started with an awkward moment while visiting Mississippi last week. A friend and I were getting take-out at a local restaurant that she and her family occasionally visit. I was obviously new to the restaurant so I didn’t know how things worked and what the specifics of their menu and operation were. I decided to order a lemonade as part of my meal, which I sipped on while we waited for the rest of her order. While I enjoyed the drink, I was also irritated that it came with a nearly complete cupful of ice, which, of course, also decreased the total amount of liquid in the cup.

So, this overabundance of ice meant that I finished the drink by the time my friend’s order was complete. The restaurant offered free refills, so I thought I was helping them by pouring my ice out into the dispensary below the soda fountain.

Except it wasn’t a dispenser, it was where they scoop out new ice for each customer.

When the clerk responded in a very slo-mo “I can’t believe that just happened” kind of way, I realized my mistake. However, as the customer, all I could do was say “sorry” with some sheepishness and leave the restaurant.

But what happened at the restaurant after we left?

It’s gratifying to sometimes get the sensation (purely psychological I am sure) that time is moving more slowly than usual. Just one month ago today, I felt that feeling while visiting Laguna Beach, California, for the first time in my life. 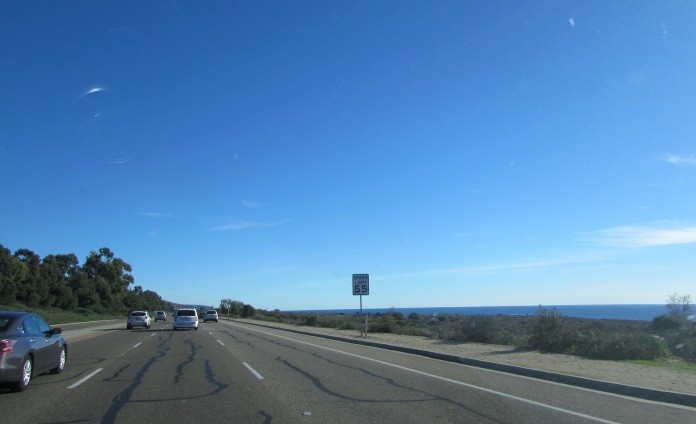 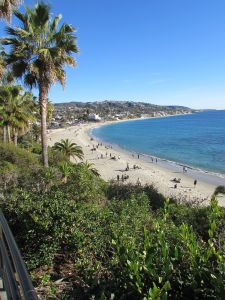 The sky opened up as my friends and I set a course down Highway 1, also known as the PCH. The traffic was modest and it seemed like most people in the area were still on their Christmas breaks. As we came over a hill, the expanse of Laguna stretched itself out in front of us, and it was exactly the layout that I had imagined and seen from film and photos. The native Southern Californian of our group decided that we’d take a look at the boardwalk, which was unsurprisingly packed with tourists and visitors. So we did, and we were lucky to find a spot… but the surroundings did not feel rushed or overcrowded. The Pacific extended out in front of us beginning with a beach several hundred feet below. It seemed to go on forever and there were many people on the beach just gently walking from point to point and enjoying the fresh air. I flashed on the contrast of the colder weather in Michigan, Massachusetts or some other location on that day and felt especially grateful to be there at Laguna.

We got back in the car and made our way through the crowded and surprisingly developed (to my first time eyes) downtown area. My friend wanted to take us to a particular favorite spot just south of town, and so we were able to make our way there, abutting a resort and what appeared to be a series of vacation condos. I didn’t have or want any particular sense of time and other commitments. In fact it seemed that time had deliberately slowed down for our outing, even though two people in the group had an evening commitment back closer to Los Angeles. 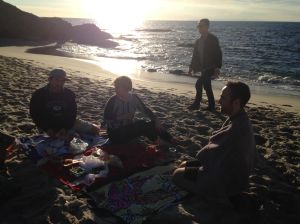 We gathered our picnic supplies and made our way down to the special spot. It did not disappoint. I felt so comfortable in the warm weather and casual setting that I decided to take a quick swim in the Pacific, admittedly partially to say that I had did it and done so at such a late point in the year. It was refreshing and had a strong tidal undercurrent, so I was careful to not get too far out. I suppose that time continued to pass as we sat there on the beach talking and spectating – the area became increasingly crowded after we arrived, with several memorable photo shoots seemingly lining up one by one to take advantage of the light and setting – but I stayed focused on the immediate moment.

At some point, as the sun began to go down, it became clear that it was time for us to pack up as well. I didn’t feel a sadness of leaving the moment, just a very strong appreciation to have been fully present in a way that seemed unique to that particular setting, taking in the majesty of the surroundings and the enjoyment of others’ company. 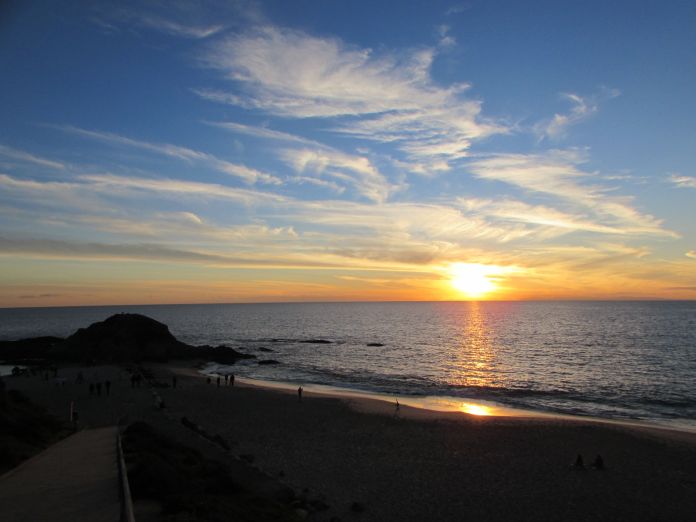