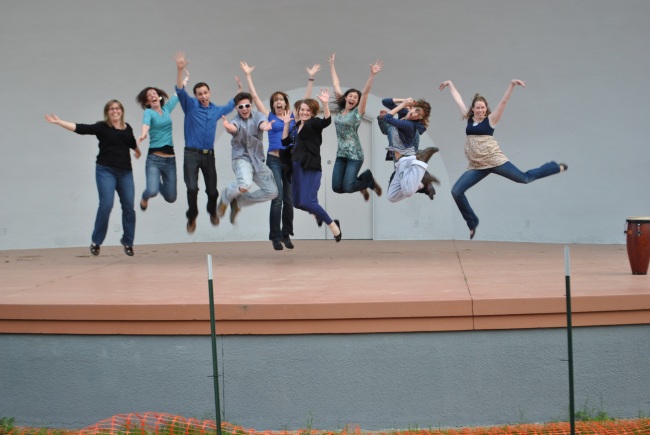 (photo by Davi Napoleon originally appeared with this article)

Some may ask that question with curiosity, delight, befuddlement or satisfaction. Some may not know the answer. Some may give a vivid definition in a few words or sentences. A unit or group of complementary parts that contribute to a single effect, for instance.

And some may be like Ann Arbor’s Penny Seats, and define what it means to be an ensemble. Though the very essence of that ensemble — the teamwork, the passion, the excitement — may not be immediately apparent to the audience member or casual fan in the theatre, it is always there with The Penny Seats. This ensemble works together onstage and off. They integrate the group into the fabric of the rest of their lives, starting with family and reaching right out to professional pursuits of law, litigation, news analysis, healthcare, dance, programming, teaching, music and beyond.

Their focus centers on the stage, as best seen in part of their mission statement, which reveals “We’re performers and players, minimalists and penny-pinchers.  We think theatre should be fun and stirring, not stuffy or repetitive.  We believe going to a show should not break the bank.  And we find Michigan summer evenings beautiful.” They even have a theme song that sings, “The Penny Seats are Nothing But Trouble”, with gleeful lyrics.

I was introduced to the Penny Seats sometime in late 2010, when my college friend Russ shared the news that he, his sister, brother in law, and other friends planned to create a new theatre company in Ann Arbor. In our undergraduate theatre pursuits, many of us were intrigued with the idea of creating a theatre company. Some friends in Boston got right to it in 2006, while other young graduates like me chose to navigate the professional world. It’s an open secret how that approach can require frequent geographic movement, and so I happily migrated around the country from Massachusetts to California and back again, accumulating production credits.

There was a natural excitement over the concept of The Penny Seats coming to reality; company co-founder and current president Lauren London reflected on that process here. I gladly contributed to the group’s initial Kickstarter campaign. I continued to pursue my professional theatre work, and this year, that led to a natural partnership of my coming to Ann Arbor to lend experience and enthusiasm to The Penny Seats as the producer for their third summer season. Over the course of the rehearsal process for Little Me, I’ve reflected on the group’s development.

In 2011 I sat in the West Park audience and admired the very first performance of The Penny Seats, noting “the free spirited versatility that the cast embraced, throwing themselves into their multiple roles with enthusiasm and commitment…The best thing about an opening night is knowing that the show can and will get stronger from here. I’m sure that will be the case with the Penny Seats, who wear their hearts and enthusiastic energy on their sleeves, their theatrical energy in their souls and their all-abiding dramatic flair around them, physically, at the West Park Band Shell in Ann Arbor.”

In 2012 I returned to catch the group in a different environment, as they performed indoors on a cold Leap Day night in Ann Arbor to find out “What Corbin Knew”. This time I noted that “The buoyancy and open-air theatrics of last summer have been exchanged for a tight playing space and awareness of unstated nuances. In several cases, what was not explained (or rather what was imagined) had more impact than plot dialogue and wordplay.Structurally, the show appears to be a comedy at first glance, but the director and the cast succeed in holding a slightly uneasy, uncertain tone for the first act that left me knowing something was going to happen. And yet, I still got enveloped in the farcical comedy, so that when the tone shifted, it came as a genuine surprise.”

Later in 2012, the group returned to West Park for a classic musical, “She Loves Me”. I was unable to attend the production, but by all accounts it was a case of the company hitting its stride. Certainly the production photographs indicate this confidence, with bright colors popping off the stage and actors comfortably in character in small and larger group scenes.

In between their shows, the group has made time to give back to the community around Ann Arbor. They launched the theatrical side of their game with a winter cabaret in 2011, and followed on with performances given for the 826michigan local nonprofit, as well as the Ann Arbor Senior Center. The tradition continues this summer with an encore Senior Center performance on July 21.

But most importantly, today The Penny Seats are once again ready to present an energetic, classic musical to the Ann Arbor community. Little Me tells the story of Belle, a girl from the “wrong side of the tracks” who finds her way over to the “right side”, through a series of captivating misadventures, on the way to her true love, Noble Eggleston. The audience is in on the joke, as most of her male suitors are played by the same actor. In this production, versatile Roy Sexton rises to that challenge, alongside Lauren London as Young Belle.

The group has again reached into a treasure chest of plays in pulling out this musical by Neil Simon. Who would have thought that Simon, best known for his New York comedies and various odd couplings, would have written a musical? It was certainly news to me when I first learned of the piece. Modern audiences may be unaware that the Little Me story began life as a novel, written by Patrick Dennis (also a named character in the musical), published in 1961. The best-selling book took its topic from popular “I/you/we can do it!” books of the 1940’s and 50’s, but was intended as a parody of those same publications. Clearly the material caught the eye of Simon and associates, where the musical followed the very next year.

In 2013 it seems that Little Me is enjoying a revival of interest. San Francisco’s 42nd Street Moon, a company charged with “presenting intimately produced performances of classic and rarely performed musical works”, staged the musical in May. A London, England, revival is planned for August. Looking ahead, Little Me will be featured in the Broadway Encores! program in early 2014.

All of which to say, The Penny Seats made a prescient and popular choice to stage Little Me right here in Ann Arbor throughout the month of July. Come on down to West Park and join in the fun. I’ll see you there.

One thought on “The Penny Seats are back on stage”