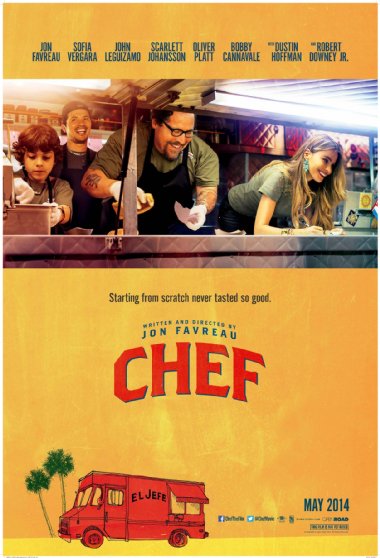 The other day I decided that I needed a close-to-end-of-week cinematic break. So I went back over to the Quality 16, my neighborhood megaplex, thinking I’d bow to crowds and go to Edge of Tomorrow. But starting at a slightly more convenient time was Chef, a movie I hadn’t heard much about but seemed to snugly fit my preferences for independent cinema.

This was a great experience of “going in cold” (not knowing much about) to the movie. I see now that the film’s trailer gives away many of the good comedic moments and provides a broad outline of the plot, which is meant to be more surprising in the film’s narrative context. But since I had not seen the trailer – or didn’t remember it – that was not a problem for me.

The movie focuses on a turning point in the life of Carl Casper (writer – director Jon Favreau) who enjoys an OK life as head chef at a swanky, but wants to be better Los Angeles restaurant. A few sharp opening scenes clearly set up the story there, where Carl seems to want to return to a professional culinary life where he can do more of what he wants, but is stymied by a controlling boss (Dustin Hoffman in a well-played and well-placed cameo role.) Meanwhile, his assistants (John Leguizamo and Bobby Canavale) still support him, and the hostess (Scarlett Johansson) seems to have eyes for him.

And then in Carl’s non-work life, he is trying to be a good example to his son, who only sees him part-time and spends the rest of the time at his mother (Sofia Vergara)’s opulent estate-style house. Carl doesn’t seem to see that his son wants more out of the relationship, but the son cleverly gains the upper hand, as only smiling 10 year olds can do, at several instances in those early scenes.

Things come to a head for Carl when a popular regional food critic (Oliver Platt) decides that he will be reviewing the restaurant. Carl and boss and associates spar over the servings for the night in question, and there are multiple lingering effects for all involved for several days afterwards.

At this point, the film introduces its most modern and surprising element: a wholehearted acknowledgement of the social media age. Carl has not kept pace with the world of Facebook, Twitter, YouTube, instant journalism and celebrity news… but everyone else around him has. He quickly learns the pros and cons of the field, and for a while I thought the movie was turning into a satire on how obsessive and compulsive these digital worlds have become, like a national obsession. The movie seems keenly aware of this option as the plot thread continues to be integrated throughout the rest of the film.

But instead, after a small helping of satire, the movie makes a left turn, and gains a warm heart. Carl’s ex points him in the direction of Miami, where all three family characters have history, and he ends up in the office of an old friend (Robert Downey Jr. in another well-placed cameo) who offers Carl the chance to take over his old food truck. With a little help from his friends and some key, warm support from his son, Carl sets off on a journey of redemption and new opportunity back to Los Angeles.

The film doesn’t end with that meeting! The story continues as Carl and friends get the truck operational and have a southern tier cross-country experience through New Orleans, Austin and points in between on their journey back to California. And there are further opportunities that appear when life in Los Angeles resumes.

The story might sound predictable in this outline, but everything is told in such a warm – hearted and also exuberant style, including an emphasis on colors in the frame, tantalizing shots of food onscreen, and the family relationships of the characters pushed to the front of the story, that this became one of the most appealing and satisfying films I have seen in some time.

Some outlets are suggesting that this film is Favreau’s own redemption or return to the indie world after a series of ups and a few downs in big – budget Hollywood filmmaking, and I could see how there might be some truth to that. But he also seems to enjoy using his increased industry cache to draw in Hoffman and Downey Jr. for winking cameos, along with an uncharacteristically dowdy Johannson willing to play a supporting role, and a luminous Vergara making the viewer feel right at home and as if they know her character.

It is clearly a familiar plot, but it’s played so well, and with insightful nods to the modern era, that the film is a breath of fresh air to the early summer movie season.

3 thoughts on “A tasty cinematic surprise”