My current lodging arrangement while visiting Switzerland is comfortable and hospitable, but it has also made me reflect on whether or not I still want to arrange hosteling, or if I was ever really into the experience of hosteling.

Part of the reason stems from how my first hosteling experience was a negative experience, where I had some things stolen that I had left in the shared room. While that was admittedly a somewhat naive choice to not keep things with me at all times, that particular hostel initially appeared to be a serviceable and welcoming environment.

A year or so later, when traveling in Europe became a more frequent activity thanks to studying in London, I segued back into the hosteling life, with the most memorable experience probably being one location that was right on a black sand beach on the renowned Greek island of Santorini. My dabbling in hostels continued over the next few years, and I recall particularly memorable destinations elsewhere in Europe, including Vienna, Helsinki and Belgrade, while other locations were not quite as memorable.

Ultimately I segued gradually into booking personal hotel rooms instead of hostels, which was initially due to increased travels with my cat and thus needing to learn the art of the “pet-friendly” accommodation. After my cat passed away I found that I’d gotten accustomed to the more personal and less communal style of lodging, and eventually came to rely solely on hotel accommodation (when needed) for a long-haul trip last year.

So all of that meant that this current hostel stint felt like a step back into an earlier era. There were some perks – such as being reminded of how seniority rises quickly, where the Thursday newcomer is the veteran by Saturday – while other moments reminded me of the less desirable aspects of communal living, such as people coming in and out at all hours of the night or using poor etiquette (lots of noise) when moving themselves out.

All of which to say I’m not sure I will be hosteling in the future, but I appreciate the memories of hostel experiences more than I realized.

It’s a rare (for my current routine) day off from the road here in Boulder, Colorado, and so I’m celebrating by not using the car and embracing the pedestrian oriented culture of the city.

After going and going for two months on the road, with occasional but not consistent “pause” stops like this, it still feels a bit odd to slow down. There is a sense of getting a bit addicted to the art of going from one place to the next, and it feels strange when that routine comes to a stop.

However, the wider through line of the travel experiences involves making the most of each day as it comes (as in staying in the present moment) and letting it all unfold in an open-ended, though still very full way. 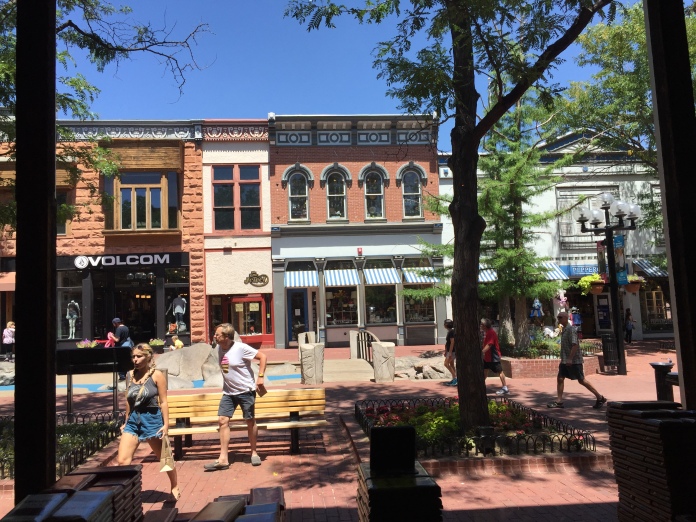 One of my cousins started a blog. And it’s not simply a commentary blog, it’s a detailed personal blog about life in the Big Apple. I’m not sure I would want to do the same thing for life in Detroit and surroundings, but it does remind me of what I call “the old days” of blogging, first when a long update on life via LiveJournal – sometimes several times per week – was the norm, later in a more public blog off and on for a few years, then morphing into Twitter updates that continue through to this day, and finally embracing the increasingly verbose and visually sophisticated art of Facebook status updates, which now IMO are currently more about the art of the “share” from another source, and less about the actual written status of the friend.

All of which to say is that this blog was originally intended as a way to “go back” to the habit of a more detailed description of daily life, and since its creation in 2009, I’ve come back to that objective periodically. But recently, for one reason or another – starting with no internet in the place I lived over the summer, and then going into a new residence from there and choosing not to have internet – this blog has felt more distant. It’s time to correct that!

SO, this weekend I spent a good deal of time in Canada, which I generally like to do, since it is literally right down the street and there are many subtle, fun cultural differences in going just over the border. At some point I became aware that the artistic culture is different as well, and I also learned that the Canadian film culture is occasionally ahead of the game from its US counterparts, as in a film is released earlier or simply comes to the area but doesn’t come to southeastern Michigan. And this fact is the most apparent when the Windsor Film Festival rolls around for another year, as it did this past week.

On the final day yesterday, the festival director excitedly noted that 17,000 tickets were sold during the five day event, a new record for their offerings. Three of those tickets were from me for three distinct films. 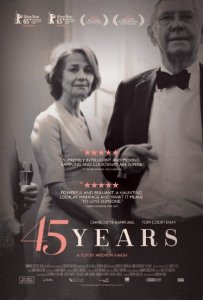 First up on Friday night was 45 Years, a buzz-building drama expected to be rolled out in the US around Christmas. Star Charlotte Rampling is also expected to factor in the end of year awards season conversation for her role in this film. She plays Kate, a retired schoolteacher living in rural Norfolk, England, with her husband, Geoff. The couple is mere days away from their 45th wedding anniversary as the film opens, and due to some health problems they experienced five years before, they’ve decided to host a large scale celebration this time. The drama gets going when Geoff receives an unexpected reminder of his past, and the narrative moves forward from there.

I notice that the synopsis sounds more like a mystery or horror film, and 45 Years very much treads in that realm at times during its 95 or so minute running time. A crucial choice made by director Andrew Haigh involves leaving many details to the viewer’s imagination and almost nothing spelled out in the narrative. That is something that I greatly approve of in film storytelling, and is yet all too rarely seen!

It’s not a surprise that Rampling (whom I had the pleasure of seeing perform onstage in 2004, sort-of met after the show, and owe my appreciation of her work to this Avengers episode) ably carries the film on her veteran shoulders. But it was refreshing to see her drop a certain steely demeanor she’s become known for IMO in some of her recent roles over the past 5-10 years – she was believable as a person who enjoys the more relaxed side of life, and life in retirement phase. But when her husband’s surprising news affects her as well, there are many questions and she conveys the lonely confusion and disarray that envelops the character’s life.

As for the other two films, I’ll have to do a separate entry.

Curiosity and boldfaced names have drawn me over to the 2013 Motor City Comic Con today. For a few of my preteen years I was an avid follower of these types of events, mostly in the form of Star Trek conventions, getting to meet (briefly) Mr. Data himself, Brent Spiner, and partake in various fan activities.

I also have a ticket for a special reunion Star Trek convention in Chicago in June, and might have to post a follow up entry on that experience.

My point in recording sensations from today’s event is to note that the feeling is different. No longer awestruck, I’m now… Curious. And sympathetic. And admittedly still entertained.

I think it’s a side effect of working in the business that I wonder what it must be like to be on the “vendor”/”talent” side of these events … Nod knowingly at a fellow vendor you saw at a similar event, maybe in a different state. Crack a joke with a former actor colleague you haven’t seen since… that one film you both are best known for. Pay close attention to the words of your fans – that may be reverential – and give them your undivided attention, even though economics and livelihood dictate you might be charging them a fee for a picture with you.

I probably just overthink it all. I see a lot of smiling faces at this event. I just might inhabit that fan role myself to speak with Ms. Marina Sirtis (Deanna Troi) because there’s no time like the present.